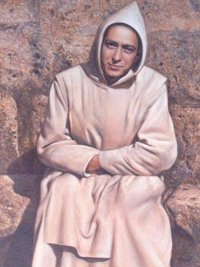 In the monastery of saint Isidoro de Dueñas, in Spain, saint Rafael Arnaiz Baron, religious of the Cistercian order, which, being novice, ill and always trusting the Lord with great patience bore his illness. Roman martyrology

St Rafael Arnáiz Barón was born in Burgos, Spain, on 9 April 1911 into a well-to-do Christian family. He was the eldest of four. As a boy he attended several schools run by Jesuits and his sensitivity to spiritual topics and to art was apparent from boyhood. These qualities were remarkably well balanced giving him an open, joyful attitude to the world, combined with exuberant good humour, respect and humility.

Bouts of fever and pleurisy interrupted his education. When he had recovered his father took him to Zaragoza to consecrate him to Our Lady of the Pillar and his family moved to Oviedo where he completed his secondary schooling.

In 1930 Rafael embarked on architectural studies in Madrid. It was in this year that his deeper commitment to Christ began. After completing his secondary schooling, that summer he had spent a holiday near Avila at the home of his uncle and aunt, the Duke and Duchess of Maqueda. It was they who introduced him to the Trappist Monastery of San Isidoro de Dueñas whose beauty and prayerful atmosphere attracted him.

He was called up but declared unfit for active duty. He decided to abandon his architectural studies in Madrid and seek the mystery of the "Absolute" in this Cistercian Monastery of the Strict Observance, which he entered on 16 January 1934 and joyfully received the white habit. He was 23. He said upon entering that this decision had not been prompted by suffering or disappointments but rather by God who, "in his infinite goodness" had given him far more in life than he deserved. Rafael felt deeply suited to the monastic rhythm of Gregorian chant and the Liturgy of the Hours. He wrote many letters to his mother, who after his death collected them in a book, and to his uncle and aunt with whom he had a close friendship.

Four months after entering the monastery, after an austere Lent, he was smitten by a serious form of diabetes mellitus which forced him to go home for treatment. Indeed, he was obliged to go back and forth between his home and the monastery again and again between 1935 and 1937. It was at the height of the Spanish Civil War.

Thus, on his final return to the monastery, he was made an oblate, taking the last place and living on the fringes of the community. Canon law at the time did not permit a person in his condition of poor health to take monastic vows.

Despite his brief life, he embodies the Cistercian grace in a remarkably pure way. From beginning to end he let himself be led through a series of bewildering contradictions and perplexities illness, war, the inability to pronounce his vows, abnormal community relations until he totally renounced himself. Humiliation was his constant companion.

His one desire was to live in order to love: to love Jesus, Mary, the Cross, his Trappist monastery. His reputation for holiness spread rapidly throughout Spain and his grave at San Isidro became a place of pilgrimage where many favours were received.

On 19 August 1989, at the World Youth Day in Santiago de Compostela, John Paul II proposed Bro. Rafael as a model for young people today, and beatified him on 27 September 1992, in Rome. In his Homily at the beatification Mass, the late Pope said of this Spanish Trappist that he set an example, especially for young people, "of a loving and unconditional response to the divine call".

Almighty God, who glorifies the humble and lays low the proud, I beseech you for the glory of your Holy Name that you dignify the memory of your servant Rafael, granting us the grace that we request for his intercession, who lived and died to glorify You, Lord. You who, with the Son and the Holy Spirit, live and reign for ever and ever. Amen.