Unconvenient advertisment? Tell us, please!
(we'll need the web address of the offending banner's link)
May 08

Our Lady of Luján

Patroness of Argentina, Uruguay and Paraguay. Brought from Brazil, the image should be transported to the North, but inexplicably, became impossible to pass of the Luján river and stayed there forever. 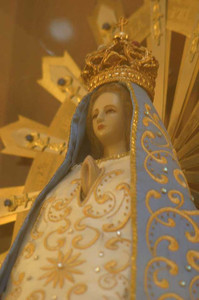 Life of Our Lady of Luján

The history of the shrine begins in 1630, with a farmer who came to Argentina from Portugal. He came from a place where the Catholic Faith was strong, but he was sad when he came to live in the village of Sumampa, Argentina. Here the Catholic Faith was very weak and there was no shrine to Our Lady. The farmer decided to build a little chapel on his land in the village, and he wrote to his friend in Brazil, asking him to send a small statue of Our Lady. The friend was not sure what the farmer wanted the statue of the Blessed Virgin to look like, so he sent two statues – one statue of Our Lady was holding the Child Jesus and the other statue was the Immaculate Conception.

The statues were shipped by sea at first and then they were placed on a cart for the journey inland. Because the natives in the area were a fighting bunch, a number of carts and pack horses banded together in a caravan. When it became dark, they camped at the ranch of Don Rosendo de Oramus.

Early the next morning, the carts began to set off one by one, all except the cart that carried the statues of the Blessed Virgin Mary; the driver was unable to get the horses to move the cart! Other men came to help, but all in vain – neither the animals nor the cart would move! Only when the statue of the Immaculate Conception was removed from the cart, did the horse start pulling. The statue of Our Lady with the Child Jesus continued its journey and arrived safely in Sumampa, where it is still venerated today.

Now the story takes another turn. An eight year old African slave boy, named Manuel, who was traveling with the caravan, stood in awe when the animals would not move. When the statue of the Immaculate Conception was removed, he begged to remain at Don Rosendo's Ranch, as a servant to Our Lady. Don Rosendo made arrangements with Manuel's owner, and kept him at the ranch. Here the statue was enshrined and here Manuel worked as a sacristan for many years, amazing everyone by his charity and piety. As he grew, he devoted his time to the care of the sick, the poor and those in need.

When Don Rosendo died in 1670, a pious lady named, Dona Ana de Mattos, obtained permission to move the shrine from Don Rosendo's Ranch to a chapel on her own property, some fifteen miles away. The ranch was too much out of the way and it was in constant danger of Indian attack! Even so, Manuel was left behind to care for the property.

The new shrine became so popular that it soon had to be enlarged. The foundation stone for the new church was laid in 1677, by Fra Gabriel, a Carmelite Friar. It was during this year that the first recorded miracle took place. Other miracles had taken place before this date, but they had not been carefully written down.

Our Lady told Manuel when he was going to die and promised him that he would go to Heaven. Manuel died a holy death on the date Our Lady had promised and he was buried in a tomb at the foot of the altar, where the miraculous statue of Our Lady was enshrined.

In 1710, another recorded miracle took place. Fr. Bernabe had a tumour in his throat. He rubbed some oil from the lamp at Our Lady's shrine on his throat, and was cured.

The pilgrims increased in number, and a church which was started in 1730, was soon abandoned in favour of another church built in 1763. This was the year Our Lady of Lujan was declared patroness of Buenos Aires. For the next hundred years, several different orders of priests laboured at the shrine and the shrine gradually became famous throughout the world.

Another great miracle occurred on August 28, 1780. On that date, news arrived at the shrine that a large group of Indians were killing all the people in their path, as they advanced ever closer to Lujan! People panicked when they heard the news and they fled to the shrine, begging Our Lady to protect them. Suddenly, while they were praying, a mysterious thick fog gathered quickly throughout the town, completely hiding it from the enemy. The warring Indians lost their way and travelled elsewhere. And the faithful pilgrims, who prayed to Our Lady of Lujan, believed that she had saved them.

Another time when parts of Argentina were afflicted with cholera, the Archbishop vowed to make a pilgrimage to Lujan if his Archdiocese was spared. Then while other cities suffered, Buenos Aires, both city and province, and Lujan, were spared from the terrible cholera sickness. Our Lady had heard their prayers again!

By 1904, the Lazarist Fathers, who were running the shrine at the time, had built a grand basilica for Our Lady of Lujan. The miraculous image of Our Lady was transferred to this basilica where it was placed in a shrine behind the main altar. Our Lady stands atop a crescent moon and her hands are joined on her breast. She wears a halo of twelve stars around her head and her robe and mantle are embroidered with golden thread and jewels. The shrine is covered with votive offerings in the form of silver hearts, as well as miniature arms, legs, and body parts, all proofs of the miracles of healing granted by Our Lady.

God in his mercy has allowed many such shrines to Our Lady, to be built throughout the world. But the most important thing is that we should all make a shrine to Jesus and Mary in our hearts. This will be the best shrine of all for Jesus and Mary.