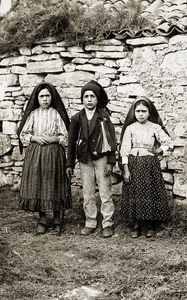 In Ajustrel, near Fatima in Portugal, blessed Jacinta Marto while being still a girl of small age, accepted with all patience the serious disease that afflicted her, always demonstrating a great devotion to the Blessed Virgin Mary. Roman martyrology

From January 21 to February 2, 1920, she was at the orphanage of Our Lady of Miracles on Estrella Street in Lisbon, which was a house founded by the D. Maria Godinho, who Jacinta called "Godmother." Mass was celebrated with her body present in the Church of Our Lady of the Angels, in Lisbon, where her body was deposited until the 24th, when she was transported to an urn to the cemetery of Villa Nueva de Ourém. She was taken to the cemetery of Fatima on September 12, 1935, when the casket was opened.

On May 1, 1951 was finally transferred to the Basilica of the Shrine.

Besides the five Appearances of the Cova da Iria and one of the Angels, Our Lady appeared to Jacinta four more times at her home during her illness, once in the Parish Church on Ascension Thursday, and even in Lisbon at the orphanage and at the hospital.

Her life was characterized by the spirit of sacrifice, the love for the Heart of Mary, the Holy Father and the sinners.

Driven by concern for the salvation of sinners and reparation to the Immaculate Heart of Mary, she offered it all as a sacrifice to God, as recommended by the Angel, always saying the prayer that Our Lady taught: "O Jesus, it is for our love, for the conversion of sinners (and increased by the Holy Father) and in reparation for sins committed against the Immaculate Heart of Mary ".