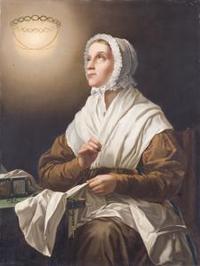 In Rome, blessed Ana Maria Taigi, a mother and victim of domestic abuse, took care of her husband and their seven children, educating them properly. Furthermore, she was always attentive to the spiritual and material needs of the poor and sick. Roman martyrology

Perhaps there was not in all of Rome, during the nineteenth century, a more remarkable woman than Ana Maria Taigi. A selfless and hardworking wife of a servant and exemplary mother of many children, who was honored with the special esteem of three successive Popes. Her humble house was the meeting place for many of the high officials of the Church and the State seeking her intercession, advice and opinion, in matters of God.

Ana Maria Antonia Gesualda was born on May 29, 1769, in Siena, where her father was an apothecary. The family lost their property and were brought to poverty. They emigrated to Rome, where Anna's parents worked as domestic servants in private homes, while the girl went into in an institution that was responsible for educating poor children. At the age of thirteen, Ana began to earn a living. For some time she was employed in a silk weaving factory and afterwords she became part of the service in a noble lady's palace.

When she became a woman she experienced a strong desire for flashy clothes and wished to be admired, which sometimes put her the edge of evil although she did not give into sin due to her strong principles. In addition, in 1790, when he was twenty, she was saved of by marrying Domenico Taigi, a Chigi Palace server. Even then she continued to feel pulled by her worldly weaknesses, but grace was slowly taking over her heart and she felt pangs of conscience that prompted her to make a general confession.

Mother and Wife Her first attempt to open her heart to a priest, collided with a curt negative, but her second attempt was successful. She found the spiritual guidance she needed in a Servite friar, Father Angelo, who was to be his confessor for many years. The priest realized from the beginning that he was dealing with a chosen soul, and she, in turn, always considered the time he met Father Angelo as the moment of her conversion. From that day she renounced all worldly vanities and was content to wear the simplest clothes. She did not take part in worldly amusements, unless asked by her husband especially. Her greatest comfort and joy was found in prayer, and her generous desire to undergo external mortifications had to be moderated by her confessor, who adapted it to the limits within which her household duties would not be affected. Her husband was a good man, but short-sighted, very fussy, and while he appreciated the obvious qualities of his wife, he could never understand the heroic efforts of Ana to acquire holiness or her special gifts. She always kept her everyday household duties with extraordinary dedication.

In reference to the time when the Blessed was beginning to be known and admired, Domenico said: "It often happened that upon returning home, I found it full of strangers. But when Ana saw me she would stop whatever she was doing, whether she was with a lady or perhaps a prelate, and she would get up and come to assist me with affection and attention. I could see that she did it with all her heart, she would have kneeled on the floor to take my shoes , if I had allowed it. In short, this woman was a joy for me and a comfort to all ... With her wonderful touch, she was able to maintain a heavenly peace at home, even though there were many, of very different temperament and had all sorts of problems, especially when Camilo, my eldest son came to live with us in the early days of our marriage. My daughter was a woman who liked to create discord and insisted on playing the role of a housewife to annoy Ana, but that soul of God knew how to keep each in the rightful place and did it in a way so subtle, so soft, I can not describe. Sometimes I would arrive home tired, grumpy and even angry, but she always managed to calm me down and give me happy existence. "

The family that Ana had to take care of consisted of seven children, two of which died when they were young, her husband and her parents, who lived with her. Each morning everyone gathered to pray, those who could. She took them to Mass and in the evenings they met again to listen to spiritual readings and pray the prayers. Ana was concerned, above all, to monitor the behavior of children.

The Blessed also had time to work on her tailoring with which, many times, she supplemented the meager income of her husband, and other times, she could help those poorer than her, because she was always extraordinarily generous and taught their children to be so .

Visions and mystical experiences It would seem that excessive domestic work would monopolize the energies of any woman, but family obligations did not deprived her high rise mystical experiences. To give an idea of ​​what it was like, we turn to the reports on the Blessed, written after his death by Cardinal Pedicini, whom she met through her confessor and served with, for thirty years the spiritual direction of that chosen soul. It is very possible that the excellent virtues and supernatural gifts of the Blessed were released through the Cardinal. From the moment of her conversion, God gratified her with wonderful insights about intentions regarding endangering and threatening the Church, and on future events and on the mysteries of faith. These things were revealed to Anne on a "mystical sun" echoing in their eyes and in which also saw the evils that men continually committed against God. On those occasions she felt it was his duty to give satisfaction to the Lord for those grievances and offer herself as a victim.

So Ana truly suffered physical and mental agonies when she offered herself in the prayer for the conversion of a hardened sinner. Oftentimes she read the thoughts and motives among the people who visited her and therefore could help in a way that seemed supernatural. Among those who were associated with it, should be mentioned Strambi San Vicente, whom she predicted the exact date of his death.

In the first years after his conversion, Ana Maria had abundant spiritual consolations and raptures, but later, especially during the last years of her life, she suffered greatly from the attacks of Satan. This evidence, coupled with the losses of their health and the gossip and slander, which gave her occasion to show resignation and bear them cheerfully. On June 9, 1837 she died, after nine months of painful suffering, at the age of sixty.

She was beatified in 1920 and her tomb is located in Rome, at St. Crisógono, from the Trinidadian parents, in whose order the Blessed was tertiary. Her body lies in a glass coffin so that her incorrupt body can be seen.